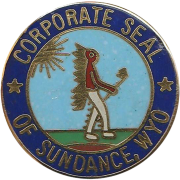 The fire departments first piece of rolling equipment was a horse drawn cart, which was housed near the city hall.  In 1950 the fire department bought their first engine, a 1949 Chevrolet, from Devils Tower National Monument for $ 500.  Then in 1968 another truck was purchased, a brand new Howie.  Later a 1982 International was purchased to replace the 1949 Chevrolet.

In the 80s the fire department went from using man powered hand tools for auto extrication to hydraulic tools.

The fire department does all the structure protection, auto extrication, assist
EMS with traffic control, lifting patients and what ever else they need.  We also do some search and rescue, and fight wildland fires.

The fire department responds to approximately 200 calls per year and serves a population of about 2500 people.  The department meets every 2nd and 4th Tuesday in the summer months and every Tuesday in the winter months.  Each volunteer puts in about 150 hours per year on training and maintenance.  Our calls range from carbon monoxide, EMS assists, life flight assists, wildland fire, structure fires and yes we've had calls for cats stuck up on power poles.

In the 90s the fire department bought a Suburban with monies from a fundraiser, it is used as a command vehicle and also as a crew transport.  A few years later in the 2000s a Ford F250 was purchased with monies from the last big fundraiser the department held.  In early 2009 the fire department was able to purchase a used engine.  It's a 1993 Pierce Lance Custom; the fire department was able to put most of the equipment on the new engine from an old ambulance the department purchased back in the 80s, that was used for a rescue vehicle.  This engine is able to carry 6 volunteers.  It also carries 5 SCBAs.  In September 2009 the city council agreed to purchase a brand new fire truck with the use of grant money.  It will be done and arrive around mid to late 2010.

Where the fire hall sits now, was built in 1979 by Energy Electric.  It used to be located near City Hall.